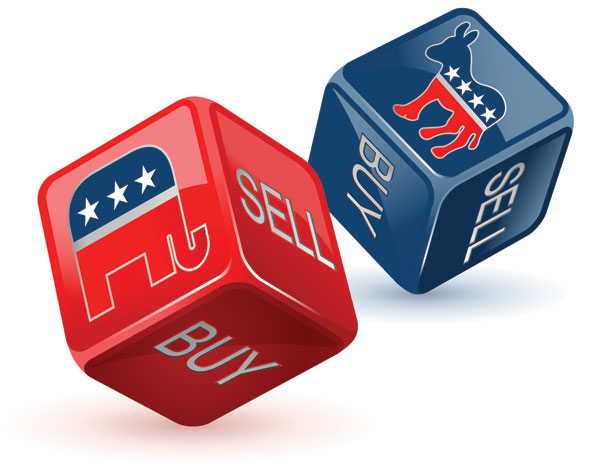 A few weeks ago, I read about some Republicans who were panicking at the idea of an Obama re-election and wondering if they should convert their investments to cash. The same week, a client asked me if he should get out of the market because he was concerned that a Mitt Romney presidency would exacerbate the tinderbox in Iran-Israel to the point of war, thus sending the global markets into another recession. These are two totally different fears leading to the same outcome – SELL!

Nick Murray, one of my new finance heroes, recently wrote that “Uncertainty is the only certainty.” If there is one thing that makes my eye twitch when it comes to stock market commentary, it’s when they talk about how the uncertainty of (insert story of the week here) is making investors unusually nervous. The story du jour will keep changing. Pick your favorite – Greece, Spain, a looming fiscal cliff, unemployment, Wall Street scandals, Apple, terrorism, oil prices, global warming and, now, the election. Either investors are being misled by their advisors, or they are in denial about what the investment experience is supposed to be like.

Back to the election. Will one outcome actually be better for US investors? Nick Murray posed this question: “Roughly how many fewer boxes of Pampers, cans of Coke and iPads will be sold around the world in the next 4 years if the incumbent is re-elected?” Just to throw a bone to your curious side, post-election stock market returns have been researched, and I’ve found no data that would compel you to buy, sell, or hold, in anticipation of an election outcome. For the record, from 1929 to 2011 the stock market, defined as the Barclays US equity index, has performed well no matter who’s running the White House, but “in real terms, Democratic administrations produced 300% cumulative returns. The Republicans accounted for nil” (http://bit.ly/RvVrHA). Take that one with a grain of salt, no matter which party you currently, er, favor.

If you’re one big Dow decline away from making an investment decision, you are being steered by fear. If you are thinking of moving to cash until the election results are in, remember how the markets yawned when Obama was favored. When the dust settles, half of the country will feel that their President is completely out of touch with their social views, but we will still need Pampers and Coke. Well I won’t, but I’ll be happy to take my dividends on behalf of those who do.

The opinions expressed are those of the author and are subject to change without notice in reaction to shifting market conditions. This blog is provided for informational purposes, and it is not to be construed as an offer, solicitation, recommendation or endorsement of any particular security, products, or services.