Long-term Saving for the Short-term Worker: Spend One, Save Two (Part 3) 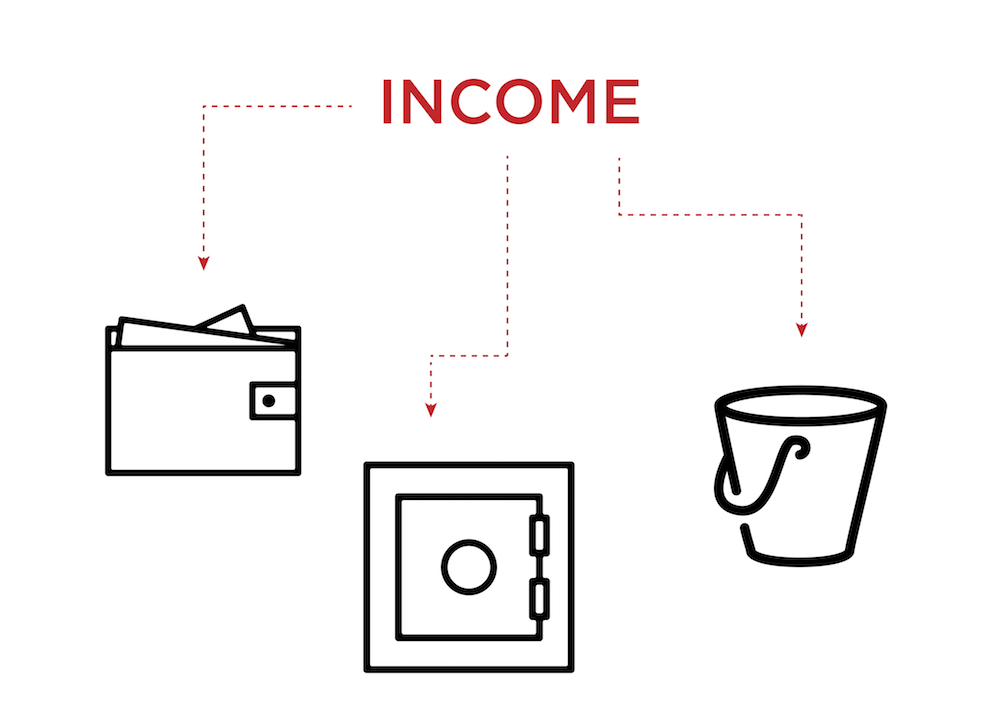 Scott, our Hollywood writer and producer who earns big paychecks for short periods of time, determined how big his nest egg will need to be to support his minimum lifestyle in Long-term Saving for the Short-term Worker (Part 2). Now, the tricky part. He wants to get there ASAP, but he also has a couple of big-ticket purchases he’d like to make in the near future (home and kids’ college) and faces an unknown income situation in 2 years when his show ends. To help reach his goals, we will try something that I refer to as the Spend-One-Save-Two Rule.

In this system, Scott is permitted to spend as much as 1/3 of whatever his take-home pay is in a given year. If it’s, say, $500,000, then he could spend $165,000. But since Scott doesn’t have those Johnny Depp-like spending tendencies, he is going to lock on his minimum-spending figure regardless of how well he does at about $100,000. He will reach his nest egg goal sooner since the cash he’s not spending will go into one of two savings buckets. If his take-home pay is low (or nonexistent), he’ll pull from his liquid bucket (keep reading).

Before Scott does anything else, he’ll save 1/3 of his take-home pay (whatever the amount is) to a long-term bucket. Let’s call this his “vault.” This money is considered off limits until his nest egg reaches the point where he can support his minimum lifestyle. To make it even harder to touch (and to enjoy more tax benefits), he’ll put as much of this money as he can into retirement accounts (defined benefit plan, 401k, etc.).

Save 1/3 to Liquid Bucket

After saving to the vault, any surplus take-home pay will get invested, but he will also have the option of making withdrawals for one for one of two reasons. First, he can take money out if he has a period of low (or no) earnings and needs some cash just to meet his minimum lifestyle requirements. This is another reason why people in the entertainment field should keep a larger “emergency fund” of cash in the bank (perhaps as much as a year’s worth of expenses) and then invest anything beyond that. Scott has a few years’ worth of expenses in this account, so he’s already prepared for a few dry years. Second, he can save money to this bucket for his shorter-term goals like buying a bigger house or funding his kids’ future college needs. But this comes with a big caveat.

Normally, I support the use of “good debt” such as a school loan or house mortgage…unless it’s for someone who has unpredictable income like Scott. Why? Because if he makes a big purchase that will be accompanied by new recurring costs, the whole plan can fall apart. Imagine if Scott upgraded to a fancier house. This would come with higher property taxes, repair costs, and insurance premiums (just to name a few), thus causing his “minimum lifestyle” figure to rise. If his income suddenly drops by a large sum for an extended period, he might be forced to sell the house suddenly and quickly. This would be stressful and may result in having to accept a lower price than what a seller gets when he has time to hold out for the best offer.

Cash might very well be king for people with unpredictable income. If Scott wants to upgrade his lifestyle, and home ownership is important to him, he should wait until his liquid bucket is large to buy a house with cash, thus keeping his out-of-pocket housing costs close to where they are today (property taxes, insurance, repairs, and more, will still exist). Even better, Scott can maintain his status as a wealthy renter for maximum portability – at least until he’s built up his nest egg.

The Spend-One-Save-Two system only works because Scott already has some liquid reserves built up and is expecting some additional years of high income. Hopefully this will allow Scott to enjoy his successes a bit more when they happen (splurge a bit, if he wishes), and feel more prepared the quiet periods. We’ve agreed to take it one year at a time, instead of trying to guess what this all means for his “retirement” years. For now, he knows exactly what his nest egg needs to grow to in order for him to be able to live comfortably in an expensive city. For a guy in an industry filled with excitement and stress, he now, hopefully, has one less thing to worry about.